The hopes of thousands of Nigerian music fans for a second Grammy for the country this year have been dashed as Angelique Kidjo has beaten Burna Boy to the Grammy Award for Best Contemporary World Music Album.

Burna Boy had been nominated in the category for his acclaimed album ‘African Giant’.

Although he was up against seasoned Angelique Kidjo, Nathalie Joachim with Spektral Quartet, Bokanté & Metropole Orkest Conducted By Jules Buckley and, Altin Gün, many fans were certain this would be his year.

It wasn’t to be as the Recording Academy opted to hand Kidjo her fourth Best Contemporary World Music Album gong for her album “Celia”. 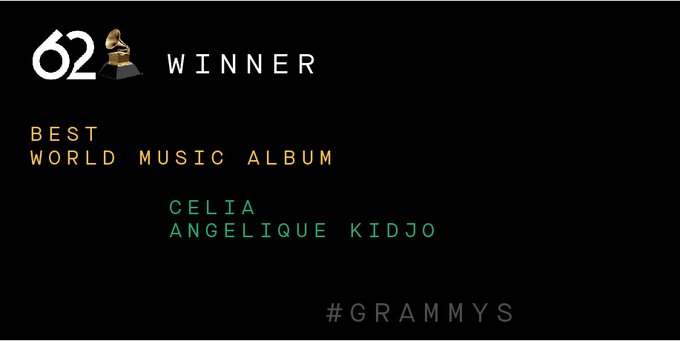 2,403 people are talking about this

Kidjo who sings in more than five languages and whose career has spanned almost four decades was gracious in receiving the award and dedicated it to Burna Boy.

“This is for Burna Boy,” she said, lifting up her award to cheers, and declaring the “African Giant” as part of the new generation of African musicians that are changing the global perception of Africa and its music.

A win for Burna would have made it the second time a Nigerian would be returning home with the Grammy plaque. Sikiru Adepoju is the only Nigerian to have won a Grammy. He won it in 2009 with the “Global Drum Project” a collaborative album with Mickey Hart, Zakir Hussain, and Giovanni Hidalgo.

Burna Boy had trended virtually throughout last week as fans, anticipating the awards, took to social media to express their love and support for him.