The Nigeria Centre for Disease Control (NCDC) on Wednesday said Nigeria has recorded 490 new cases of the novel coronavirus and an additional 31 deaths linked to the virus.

The new figures put total infections in the country at 17,148. Although 5,623 persons have been successfully treated and discharged, 455 casualties have been recorded to the virus, according to the NCDC. 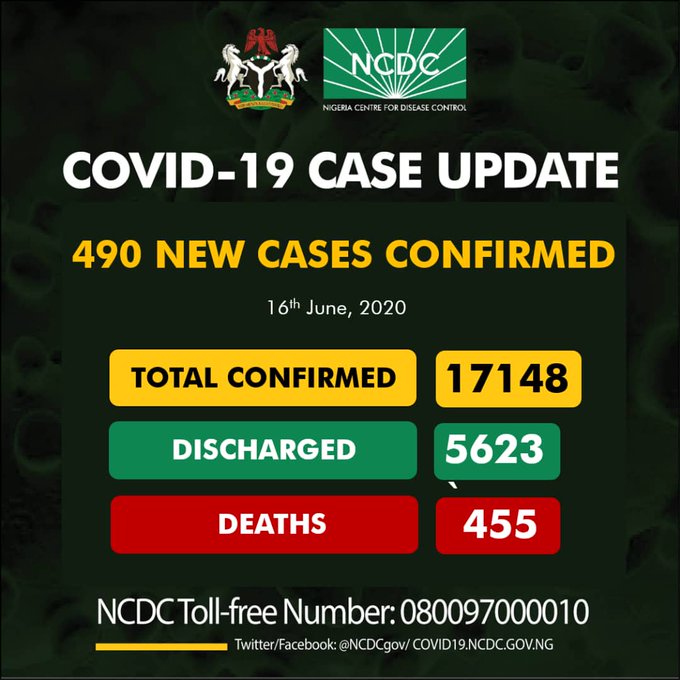 2,986 people are talking about this

On Tuesday, the Lagos state government stopped the reopening of worship centres initially scheduled to begin from June 19.

The state government cited the increasing rise of COVID-19 cases in the state as a reason for its decision.

Nigeria is currently in the second phase of relaxing COVID-19 restrictions as the government tries to re-start the economy while keeping the virus at bay simultaneously.

Experts believe cases will continue to rise as the country ramps up testing for the virus.

According to the NCDC, 96,402 samples have been tested as of Tuesday evening.

The novel coronavirus has killed at least 438,250 people worldwide since the outbreak emerged in China last December, according to a tally from official sources compiled by AFP at 1900 GMT on Tuesday.

The tallies, using data collected by AFP from national authorities and information from the World Health Organization (WHO), probably reflect only a fraction of the actual number of infections.

Many countries are testing only symptomatic or the most serious cases.

As a result of corrections by national authorities or late publication of data, the figures updated over the past 24 hours may not correspond exactly to the previous day’s tallies.