Mr President is in Riyadh to attend the Future Investment Initiative (FII).

Under the theme, ‘‘What’s Next for Global Business?’’, the event, which holds from October 29-31, will focus on three key pillars: Sustainable Future, Technology for Good and Advanced Society.

The three-day event will be held under the patronage of the Custodian of the Two Holy Mosques, King Salman bin Abdulaziz of Saudi Arabia and chaired by Crown Prince Mohammed bin Salman bin Abdulaziz, deputy premier, chairman of the Council of Economic and Development Affairs and PIF.

At the end of the summit, President Buhari will on Saturday 2nd November 2019, proceed to the United Kingdom on a private visit. He is expected to return to Nigeria on 17th November 2019,” the statement read in part.

The arrival of President @MBuhari at the King Khalid International Airport, Riyadh, Kingdom of Saudi Arabia. Mr. President is in Riyadh to attend the Future Investment Initiative (FII). #PMBinKSA 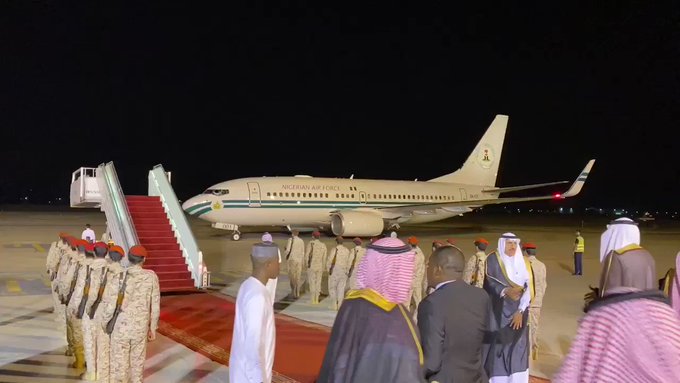