Strong winds and hail on Wednesday evening tore into the beachfront of Halkidiki region, one of Greece’s most popular tourist areas, terrifying thousands of holidaymakers caught in the open.

“For five minutes it was hellish,” said Haris Lazaridis, owner of a tavern where a 54-year-old woman from Romania and her son were killed when the roof caved in.

“There was panic, people were howling and running to hide inside,” Lazaridis told AFP. He added that over 100 people were sheltering under the roof when it collapsed.

Nearly 30 people have been hospitalised in nearby Thessaloniki, including a 13-year-old girl from Serbia.

“It was a miracle that there weren’t more deaths,” said 39-year-old Kyriakos Athanasiadis, who is vacationing in the area.

“Nearly all the coastal restaurants were full, and you could see large objects flying,” he told AFP.

One woman reportedly told hospital staff she was picked up by the wind and thrown in a garbage bin, which then rolled away.

The freak storm only lasted about 20 minutes, but it was enough to overturn cars, uproot trees and balcony railings and cause mudslides. 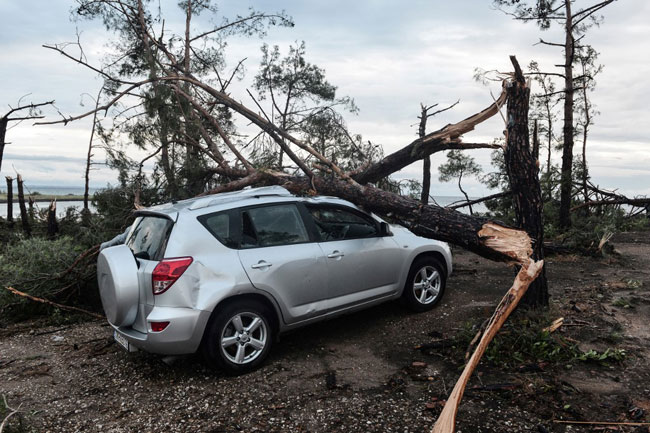