Two BRT buses were involved in a head-on collision on Monday morning at Asolo, Ikorodu road in Lagos.

This was confirmed by the Lagos State Emergency Management Agency (LASEMA) via their official Twitter handle.

The accident which occurred on the BRT corridor resulted in traffic gridlock as onlookers flooded the scene of the crash.

Although the casualty figures are yet to be confirmed as at the time of this report, eyewitnesses say many who were injured have been taken to the hospital for medical treatment. 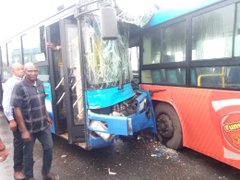 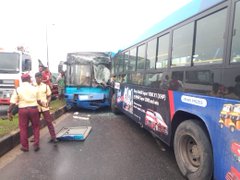 57 people are talking about this

This accident comes barely one week after several persons were injured after a trailer collided with a BRT vehicle in the Ikorodu area of Lagos State.

The trailer going inwards Ikorodu skidded off the main carriageway and collided with the BRT.