Welcome to our live updates page on the arraignment of the convener of #RevolutionNow protest, Mr Omoyele Sowore, and his co-defendant, Mr Olawale Bakare.

The duo are being arraigned by the Federal Government on seven charges bordering on alleged conspiracy to commit treason, money laundering, and insulting the President, among others.

They were brought to the court on Monday by operatives of the Department of State Services (DSS).

However, counsel to Sowore and Senior Advocate of Nigeria, Mr Femi Falana, is absent in court.

The arraignment comes one week after Justice Taiwo Taiwo ordered the release of Mr Sowore, more than five days after a detention order the judge issued against him elapsed. 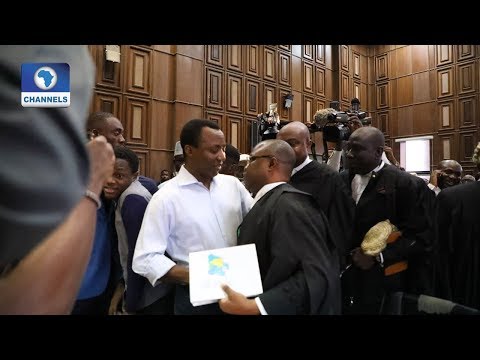 11:57 AM: The defendants’ lawyer asked for a short adjournment to enable him move the bail application which he said will be filed today and served today.

11:51 AM: The trial judge said the bail will be granted based on the terms of the court and asked Mr Olumide to file a formal bail application.

11:49 AM: For the second defendant, Mr Olumide said he is concerned with only two of the counts. He made an oral application but he was stopped by the judge who said a formal bail application must be made.

11:44 AM: The defendants’ counsel informed the court that the reason given for keeping them in custody was for the DSS to conclude investigation and the prosecutor has just confirmed that investigations have been concluded.

He noted that the first defendant has been admitted to bail prior to today but has not been allowed to enjoy the bail.

Olumide asked the court to admit Sowore to bail on the basis of the condition for bail which he was formally granted.

“We can make available to the court evidence of bail conditions met. His passports and other travel documents are with the Chief Registrar of this court,” the lawyer added.

11:43 AM: The prosecutor asked for a date for trial after telling the court that investigations have been concluded.

11:45 AM: Count 7 is transfer of funds. “That you Omoyele Sowore on 16th July at Lagos and Abuja committed an offence by transferring the sum of $16,975 from your account in USA with the aim of concealing the illicit origin of the funds. He pleaded not guilty.

11:40 AM: The sixth count is transfer of funds contrary to the Money Laundering Act. “That you Omoyele Sowore on the 27th of June did commit an offence by transferring the sum of $16,967 credited by Sahara Media Group USA with the aim of concealing the illicit origin of the funds.

He entered a not guilty plea.

11:38 AM: Sowore was also accused of transferring $20,475 dollars from his UBA account credited by Sahara Reporters Media Group in New York with the aim of concealing the illicit origin of the funds. He also entered the same “not guilty” plea.

11:37 AM: Sowore said he is confused that he has no UBA account and does not understand how one can transfer money from City Bank through UBA to another bank.

He, however, said since his counsel has advised him to enter a plea, it is a not guilty plea.