Reps Set Up Committee To Investigate, Monitor Recruitment Of Nigerians By MDAs

The House of Representatives has resolved to set up a committee which will investigate and monitor the recruitment of Nigerians by Ministries, Departments and Agencies (MDAs) of the Federal Government.

The resolution was reached to day on the floor the House of Representatives.

According to an order of the plenary on Wednesday, the House stated that its move comes on the heels of reports suggesting that the Federal Character principle is not always followed in filling openings within the MDAs.

The House noted that the Civil Service, Public Service and Public Sector is the single biggest employer of labour in Nigeria and accounts for the funding of the most homes in the nation directly and indirectly. Adding that if the Federal Character principle is not adhered strictly to and the recruitment within the MDAs are not investigated and monitored, then poor output may be experienced in the civil and public service, arising from unqualified and poorly motivated workforce.

To this end, the House resolved to put together an adhoc committee which will investigate and monitor the Ministries, Departments and Agencies of the Federal Government. This the House did, minding that bearing in mind that standing committees have not been constituted. 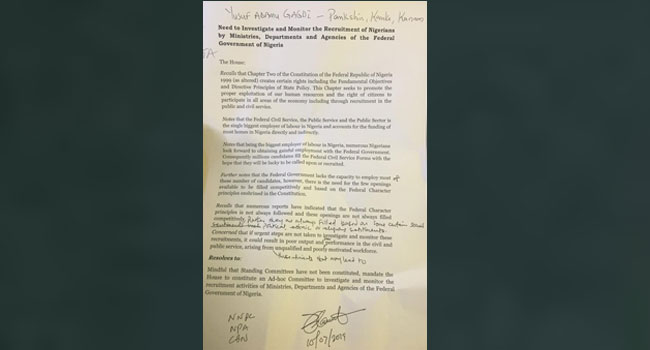