The Minister of Youth and Sports Development, Sunday Dare, could not hide his feelings on Saturday after watching brilliant performances by two young female boxers.

Mr Dare shared a video of eight-year-old Shekinah on Twitter while that of another young female boxer was twitted by a user – @samson_stringz.

In the video, the young boxers were captured at different training sessions by their coach exhibiting performances which caught the attention of the minister.

Reacting to Shekinah’s video, Mr Dare described her performance as “amazing stuff” and a show of “brilliant boxing talent”, saying “the gold is in the child”.

He confirmed that he had reached out to her father and her coach and promised to adopt Shekinah to help develop her talent.

The minister who was also thrilled by the performance of the other young boxer inquired about her name and her coach’s details.

He noted that the performances of the girls have inspired him to lead the ministry to set up a Talent Hunt Programme (THP) aimed at discovering young stars and nurturing them.

Watch the videos below:

pic.twitter.com/dMRjjCh5i5 The video of 8-year old Shekinah. Amazing stuff. Brilliant boxing Talent. The gold is in the Child. I spoke with her father Quadri in Lagos this morning and her Coach Sulaiman ‘energy’ to find out about her. We will follow her and get her adopted. 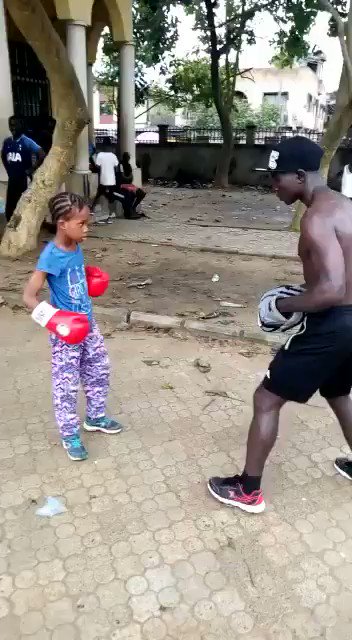 7,557 people are talking about this

I need the name of the little girl and the number of the coach. Another budding talent. I am inspired to lead the ministry to crank up a Talent Hunt Program. THP that will pick up these young ones and nurture them. https://twitter.com/samson_stringz/status/1193165238402715649 …

I saved this some months back sir, you might want to find this girl, her coach and her parents too.