A Westminster Magistrates Court in the United Kingdom, on Wednesday, ruled that David Nwamini Ukpo, the alleged kidney donor for the daughter of Senator Ike Ekweremadu, is not 15 years old. Arise TV reports that the Ukpo has admitted to the court that he is 21 years old and had been in the UK since […]

The Benin Zonal Command of National Agency for the Prohibition of Trafficking in Persons (NAPTIP), says it rescued 105 victims of human trafficking in various operations in 2021. Mr Nduka Nwannwenne, the Zonal Commander, NAPTIP, said this when he spoke with the News Agency of Nigeria (NAN) in Benin on Wednesday. Nwachukwu said that some […] 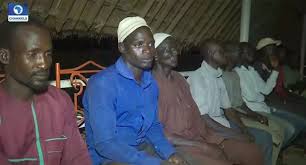 No fewer than 31 persons trafficked mostly from Katsina and Zamfara states, through Benin Republic, and taken to Burkina Faso, have safely been returned home. Out of the 31 victims, the return of seven was facilitated by the Nigerian embassy in Burkina Faso while the Katsina State Government assisted the return of the remaining 24. […]